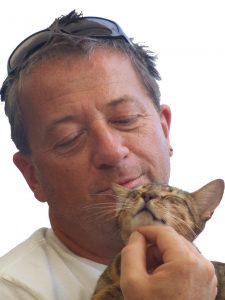 Peter began his professional career as a Research Biologist for the Universities Federation for Animal Welfare in the UK working in academic and practical animal welfare around the world for several years before returning to the UK to work in companion animal behaviour therapy practice. He established the first companion animal behaviour referral clinic at a UK Veterinary School at the Dept of Veterinary Medicine, Bristol in 1990 and was in practice for the referral and treatment of behaviour problems in pets for over thirty years. He has lectured at veterinary, ethology and training conferences and seminars across five continents, including at three World Small Animal Veterinary Congresses.

Peter was a founding partner of the Centre of Applied Pet Ethology in the UK in 1993, now a leading independent on-line education provider in its field of companion animal behaviour and pet behaviour therapy. COAPE pioneered the development and application of the EMRA and ESTA approaches to pet behaviour problem assessment and therapy originally taught through nationally regulated residential Diploma and other courses in the UK, and through COAPE established agencies in Poland and South Africa. COAPE is now also actively applying the EMRA approach to zoo animal enrichment projects with Johannesburg zoo https://www.coapesa.com 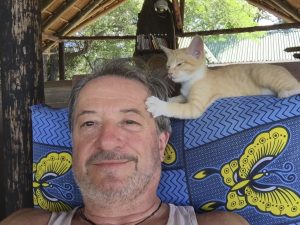 Peter was appointed Clinical Professor at the Dept of Veterinary Medicine, at the University of Miyazaki in Japan 2008-11 and, after 5 years as a Visiting Scholar at the Dept of Animal Sciences in The Ohio State University, was appointed Adjunct Professor in 2009 and now teaches there annually. He is the author of the internationally best-selling books ‘Do Cats Need Shrinks?’ and ‘Do Dogs Need Shrinks?’ and author/co-author of 16 other books (including ‘EMRA Intelligence’ in 2016), various scientific publications and several films on feline, lupine and canine behaviour. Commercially he was the companion animal behaviour consultant to Nestlé Purina Pet Care, UK for 12 years until 2015 and Premier Pet Products, USA from 2011-13.

Peter is now semi-retired, working as a part-time ethologist and guide throughout southern Africa for Rae Safaris http://raesafaris.co.za/ out of  in Johannesburg. When in Europe he lives predominantly in Helsinki, Finland with his partner. He has two children; Sinead, who is studying in New Zealand, and Leo who is working in Brighton, UK. 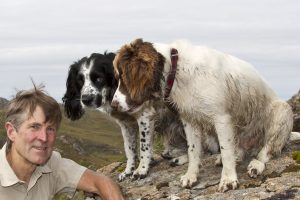 Robert is a highly experienced and widely respected veterinarian and companion animal behaviourist based in Scotland. From 2008-19 he was veterinary director and head of education of the Centre of Applied Pet Ethology(COAPE), the first organisation in the UK to develop government-regulated courses to degree level specifically in companion animal behaviour and training. COAPE also developed the renowned EMRATM and ESTATM assessment and treatment systems used by behaviourists and trainers all over the world, and summarised in their book, ‘EMRA Intelligence: The revolutionary new approach to treating behaviour problems in dogs’, available in English, German and Dutch. Robert remains an advisor to the three current iterations of COAPE, COAPE International, COAPE UK and COAPE Poland and to Katten Academie in the Netherlands.

Robert’s primary academic interests include companion animal cognitive science and emotionality, nutrition and its effects on behaviour, and applied neurophysiology, pharmacology and therapeutics in companion animal behaviour therapy. His mantra is ‘The key to better animal welfare is through education and better understanding of the rich emotional lives our pets share with us’, which he promulgates through his informative EMOTIONS-R-US Blog. This is published on his website, https://www.emotions-r-us.com/ and has been taken up and endorsed by many training and behaviour organisations all over the world.

COAPE developed the EMRATM (Emotional, Mood State and Reinforcement Assessment) and ESTATM (Emotional Systems Therapeutic Application) approaches to the assessment and treatment of companion animal behaviour problems over 15 years, publishing the methodology and practical application widely in veterinary journals and pet press in the UK, and at seminars and conferences in many countries around the world. The resulting book ‘Emotional Intelligence’ was first published in 2017 and is available in English, German and most recently (in a canine version only), in Dutch.

The EMRATM and ESTATM  methodology is a practical application of the pioneering work of Dr Jaak Panskepp on the evolution, physiology and neurochemistry of seven emotional systems in mammals (see his book ‘Affective Neuroscience’ 1999 and revisions). COAPE recognised the implications of this seminal work; that the expression and development of all behaviour and learning both arises from and is constantly influenced by complex emotional ‘feeling’ states in these seven systems, and that identifying and harnessing those responses lies at the heart of treating behaviour problems and training methodologies in pets. The Directors of COAPE, veterinary behaviourist Dr Robert Falconer-Taylor MRCVS and ethologist Professor Peter Neville, were delighted to first teach the EMRATM and ESTATM  approaches as part of the Katten Academie Diploma in 2016/17, and proud to assist the Academie in incorporating the methodology permanently into their Diploma and other teaching programmes.